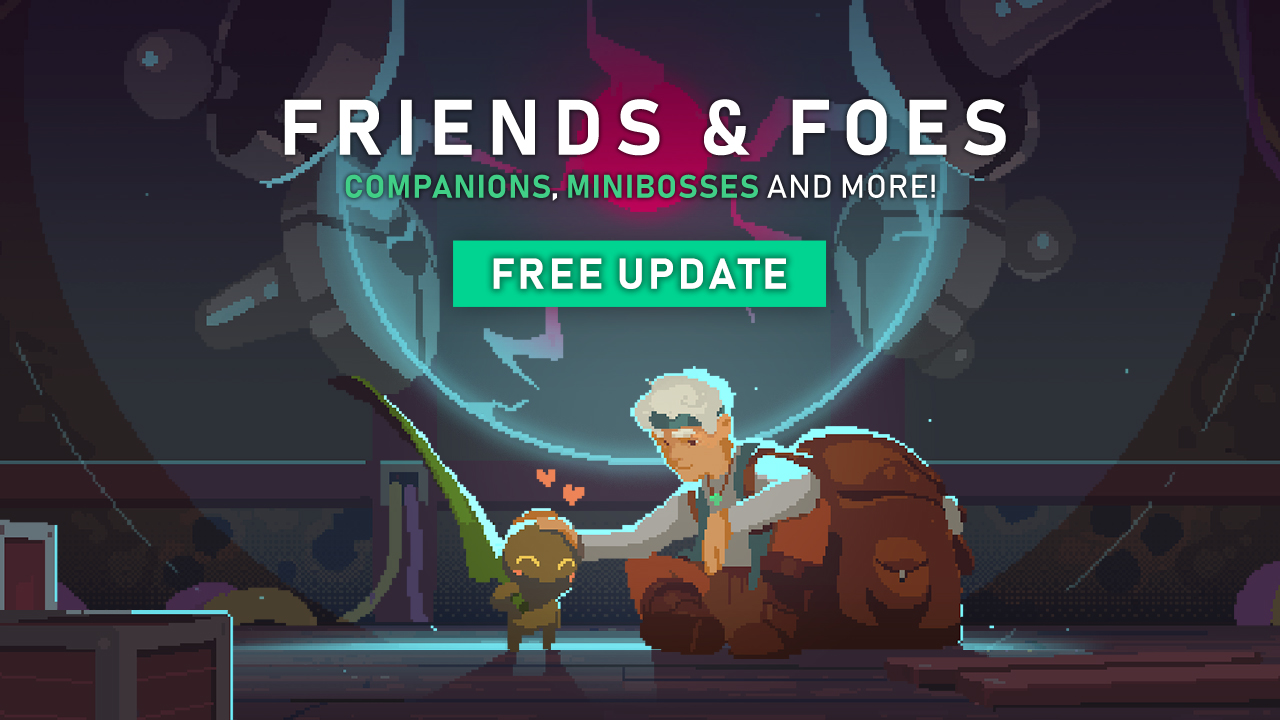 Someone smart said that a true friendship is born at that moment when one person says to another: “Let’s slay some monsters together!”. And even though our freshly introduced 9 familiars cannot really talk – they are more than happy to aid you during the most dangerous endeavors. To counterbalance that, though, we’ve also added brand new ferocious minibosses – so we’re hoping that you and your new companions are getting on well with each other, you’re gonna need all the help you can get! On top of that, we’ve added plenty of other features, changes and fixes – find the full list below!

Companions
We have developed 9 new familiars. To get them, you need to kill a particular enemy type 10 times. Then, a special Egg will appear! After 3 days, the egg will hatch inside your farm – and your new friend is going to be ready for action! Each familiar has different mechanics. They can damage enemies, restore your life, get items for you, act as an additional chest and more

Minibosses
We have added 8 minibosses! They will appear as guardians of the dungeons, securing gateways leading to deeper rooms. They will emerge at the end of the first and second floor in each dungeon.

Zenon’s Campfire
From now on, when you visit the dungeons at night, Zenon will be there, sitting by his campfire, ready to tell you some stories of old, about Rynoka and Moonlighter’s world. Those tales will be unlocked with the game’s progression.

Tomo Stories
We’ve modified and added more lines for Tomo. They should explain her relationship with Will better, shedding some light on their mutual past.

Banker Information
We have introduced a lot of special warnings and UI changes to avoid the Banker “stealing” your money. A lot of you forgot to revisit that mustachioed capitalist and were losing the investment.

Sorting Items
We’ve added a sorting method inside the inventory.

Get the Broom!
We’ve added the possibility to get the Broom™ from Le Retailer (if you’ve managed to lose it somehow!). The Broom™ is important for getting some achievements – so we hope you’re gonna like that little feature!

Prices Update
We’ve added a new system in the Shop to better inform whenever Item’s price gets updated.

Important notice: we’ve worked hard to make this Update available simultaneously for all the platforms (Xbox One, PlayStation 4, Nintendo Switch, PC etc.). However, it may be available during different hours for various platforms. So don’t panic if you notice this update on PC but not on your console at the same time! All versions should be synchronized later today.

Of course, that’s not our last word! We’re working on more content and we’re going to announce it as soon as we’re ready!